“Close Calls (Revisited)” adds a few more “neat stories” to the many incidents I faced in
a military career spanning three wars and a revolution; taking me from the hills of Korea as
a U.S. Marine, to the skies over Vietnam as an Air Force Fighter Pilot who, between wars,
stood watch over the U.S.S.R  to ensure that Russia remained behind her “Iron Curtin.”
The revolution? That was Libya, Sept 1, 1969, and a young Lieutenant by the name of
Muammar Gaddafi…one of my most memorable encounters.
Ezdy was with me on that one too.

Writing “Close Calls and Other Neat Stories,” and now Close Calls (Revisited),
gave me the opportunity to revisit some of the most exciting, most memorable
chapters of my military career. Indeed, each time I re-read a story during the
editing process, I asked myself how I had survived so many life-threatening
​encounters.
Some of the predicaments in which I found myself were self-inflicted; the
inevitable result of reaching a little too far each time I climbed into an airplane,
picked up a rifle, or engaged in any kind of competition. Indeed, I was always my
own biggest competitor. No matter what I was doing it was never enough for me
to just get it done, it had to be done better than I had done it before. Yet, despite
a strong personal drive to perfect my flying skills, it was never important for me
to be better than everyone else. I did not have a need to be first in anything; I just
wanted to be better than me.
Thus, by never accepting my best as my best, I believed that I would eventually
stand with the finest in my chosen profession. That is what was important to me.
I knew (we all did), that being number one in the fighter pilot business is something
that could change on any given day.
Having said that, however, there was one title I had hoped to attain before I
hung up my “g” suit for the last time, “Top Gun.” For a fighter pilot it is the most
sought after prize; one that I achieved twice in my Air Force career. The first was
earned in a peacetime setting in which no one was shooting back at me; the other,
when they were. The former got my name engraved on the side of a trophy that
once stood in a glass cabinet in the operations building for the 530th Tactical
Fighter Squadron, Cannon AFB, New Mexico—a squadron that no longer exists.
The latter, and the recognition that is eminently more meaningful to me, came
from the men with whom I flew combat in Vietnam.
In my twenty-five years of military service I’ve earned my share of medals and
awards, but none were as satisfying to me as the recognition and respect I received
from my peers in the Air Force, the United States Marines, and my co-workers in
the civilian companies I worked for after retiring from the Air Force.
Recognition as “Top Gun” was professionally gratifying, but there were many
other highlights in  my military career. Perhaps, the most personally rewarding
came when I marched my squad across the frozen hills of South Korea’s northern
border to help fellow Marines complete work on their defensive fighting positions
and found no one there to greet us. Nevertheless, what transpired between me and
my squad on top of that deserted hill served to remove any doubt I may have had
about my ability to lead other men.
Indeed, it validated a belief in myself that there was nothing I could not do,
or try to do, and inspired a self confidence that saw me through the many difficult
situations I would confront in the future.
I was a Junior in W.C. Mepham High School, Bellmore, New York that summer
in 1950, when I made up mind to Join the U.S. Marines after graduation the following
year. I did join, but not immediately. My older brother, Vince, was a Marine, and had
already served in the Korean War. My younger brother, Joe, had also declared his
intentions of joining the Army as soon as he was seventeen. If my sister, Marie, had
been old enough (she came along about ten years after Joe), I’m sure she would have
joined the Navy, or Coast Guard, and our parents would have had a “Four Star Banner”
hanging in the front window instead of three.

Given those circumstances, I couldn’t just leave Mom and Dad—not right away.
So, I took a job as a plumber’s apprentice to help with family expenses. It paid only
a dollar fifty an hour, but that wasn’t bad back then, and I was learning a trade I could
use when I got back.
I joined the Marine Corps on the 17th of January 1952, barely a month after my
eighteenth birthday. The words of my friends—spoken the summer before—still
echoed in my mind as I signed the papers: “Join the Marines and go to Korea? Are
you crazy? You’ll get yourself killed!” They may have been half right.
But, that was then. Now, more than six decades later, if I were asked to sum up
my life in one sentence, define who I am as a man, I would do it by paraphrasing the
response of that seventeen year old idealist to his friends: “I don’t want anyone else
doing my dying, or my living, for me.”
I spent only three years in the Marine Corps, but they were life-changing. When
I walked through the main gate of the Brooklyn Navy Yard in my dress-green uniform
and “spit-shined” shoes—honorable discharge papers in hand—it was with an unshaken
confidence that I could face any challenge…do anything. 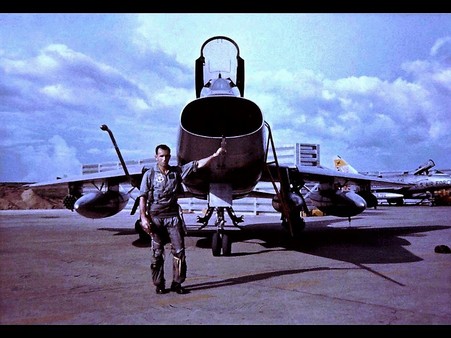 I would become a Fighter Pilot

This file includes the original color and grayscale photos, which is only be available in the E-Book
version. In the initial new edition of Close Calls all pictures will be in grayscale.

The original edition of Close Calls and Other Neat Stories is available now on all on-line bookstores.
The new edition (posted here) Close Calls (Revisited) will be published in the near future.

I would appreciate your posting a review of the book on Amazon and Barnes and Noble.  Thank you.